6 ways to prepare for an earthquake 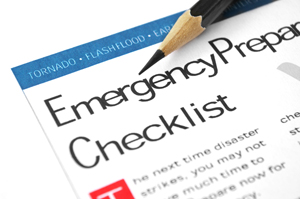 Earthquakes can happen almost anywhere and the Federal Emergency Management Agency (FEMA) stresses that facilities should have a plan in place in case an earthquake strikes, even if that workplace is located in a region where earthquakes occur less frequently.

The following are some precautions recommended by FEMA, the Center for Disease Control (CDC), and the Occupational Safety & Health Administration (OSHA).

1. Secure your space. During an earthquake, injuries often occur when people are struck by falling objects. Employers can help to prevent injuries during an earthquake by fastening shelving and other large furniture to walls, installing latches on cabinets, and strapping down printers and computers.


2. Make a plan. Create a document that describes what to do if an earthquake occurs. Share the plan with every person in the facility to ensure they know what to do in case of an earthquake. Include emergency communication procedures in this plan and explain where workers should meet afterwards if they become separated.
3. Designate safe places. Throughout your facility, identify safe places such as underneath sturdy desks or tables, or against a wall, away from large objects or furniture that could fall. These safe places should be as close to work areas as possible. The less distance workers must travel, the less likely they are to be injured. Statistics show that people moving as little as ten feet during an earthquake are the most likely to be injured.
4. Have earthquake drills at least twice a year. Regular practice will help employees respond quickly when an earthquake strikes, making them less likely to be injured. During these drills they should practice the “drop, cover, hold on” method, immediately dropping down into a safe place with their head down, covering their head, neck, and eyes, and remaining still until it is safe to move.
5. Gather supplies. Marcus Coleman, a Program Specialist with the Federal Emergency Management Agency (FEMA), says having plenty of water and food is one of the most important things to do to prepare. Workplaces should try to store enough supplies for three days. Coleman also recommends keeping fire extinguishers handy. Fire is the most common earthquake-related hazard, due to broken gas lines, damaged electrical lines or appliances, and previously contained fires or sparks being released. First aid kits can also be extremely useful in any type of emergency.
6. Get additional emergency training. Select groups of employees to receive first aid and CPR training from your local Red Cross chapter. Any information and training provided to workers will help them be more prepared in the event of an earthquake.


The U.S. Geological Survey (USGS) states that, although earthquakes are more likely in western states, it is important to note that severe earthquakes have also occurred in the eastern United States. It is crucial that all workplaces plan for the possibility of this type of disaster. With some basic preparation, employers can help to minimize the damage and injuries caused by earthquakes.