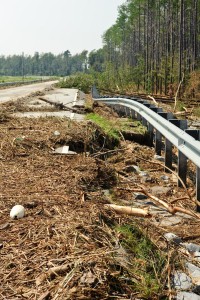 On September 28, 2011, U.S. Department of Transportation (USDOT) Secretary Ray LaHood announced he has released $5 million in emergency funds for New York roads and bridges. These funds are to be immediately available to the New York State Department of Transportation (NYSDOT) to help repair roads and bridges that were damaged after Hurricane Irene.

"Hurricane Irene left New York residents with an enormous cleanup job and limited mobility because of damaged roads and bridges," said Secretary LaHood. "This emergency relief funding will help the state cover the costs to make repairs and restore the routes critical to communities hurt by the storm."

The flooding in New York began on August 26, and caused substantial damage to roads and bridges. NYSDOT has agreed to use the quick release funds to continue emergency repair projects in 31 counties across the state.

The estimated overall damage to highways under federal jurisdiction will likely exceed $100 million.

Before repairs start on bridges and roadways, contractors are encouraged to use safety resources and information available from the Occupational Safety and Health Administration (OSHA), which provides guidelines for cleanup after torrential rains, flooding, and storm surges.

While working on roads and bridges, it is important to use safety products required for the worksite such as hard hats, fall protection, and hi-vis protective clothing to ensure workers' safety.