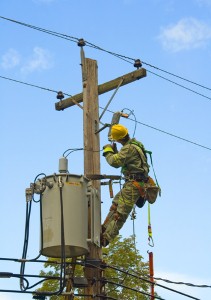 In Fort Wayne, Indiana, one electric utility has announced that several copper thefts have been reported across its service area, which have led to higher risk of injury for the company's electrical workers.

The thieves have been going after copper wire and other pieces of equipment found on utility poles, and in cabinets and substations. The thefts present a major problem, as tampering with electrical equipment can change the way a system operates, posing a danger to both employees and the public.

Now, Indiana Michigan Power has released a statement seeking help from the community to identify thieves. One clear indicator of authorized personnel performing work on electric infrastructure is the use of safety products, such as hard hats, safety glasses, and work gloves. Also, utility line employees rarely use ladders to gain access to utility poles, but rather mechanized bucket trucks.

This issue has not been limited to Indiana. Many states, including Kentucky, Ohio, Florida, and the Carolinas have reported thefts. The Wake County, North Carolina Sheriff's Office has reported 137 cases of copper thefts since January 2009, the Charlotte Observer reported.