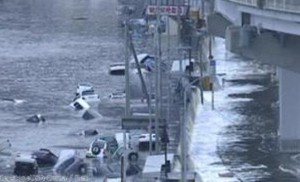 On December 5, researchers from NASA and Ohio State University briefed the American Geophysical Union on why the devastating March 11, 2011 tsunami in Japan was so powerful.

According to the experts, the natural disaster was a "long-hypothesized 'merging tsunami'" that formed as two wave fronts came together. The findings were based on satellite images that recorded two separate waves on the day of the disaster - an event research scientist Y. Tony Song of NASA's Jet Propulsion Laboratory says was "one in 10 million."

"Researchers have suspected for decades that such 'merging tsunamis' might have been responsible for the 1960 Chilean tsunami that killed about 200 people in Japan and Hawaii, but nobody had definitively observed a merging tsunami until now. It was like looking for a ghost," he stated.

In addition to devastating losses, the tsunami has left Japan with a lengthy and dangerous cleanup effort that is still ongoing, with workers facing hazards from debris piles and an affected nuclear power plant.

In the event a tsunami comes to the United States, many government agencies including the Occupational Safety and Health Administration (OSHA) have developed emergency preparedness and response guidelines to prepare for such a disaster and the related cleanup. These guidelines include requirements for cleanup workers to wear proper safety products, including work gloves, protective clothing, and respiratory protection.