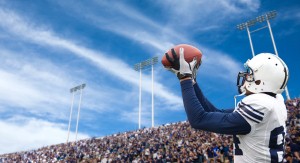 As the largest sporting event in America draws closer, it's a good time to bring the hard-hitting facts about head injuries to light - on the field and at a worksite.

Dorsett described to the The Associated Press the hardest hit he ever took in his career, which left him unconscious on the field.

"That ain't the first time I was knocked out or been dazed over the course of my career, and now I'm suffering for it," Dorsett stated.

The importance of head protection is also being discussed in youth football, as some 3.5 million kids between the ages of 6 and 13 play the sport, according to an independent report conducted by former NBC news anchor Stone Phillips.

"When you think about the number of people playing the game, and where we need to be focused in terms of safety and exposure to risk, certainly more work needs to be done here," he told TV Newser following the release of his investigative report.

When workers are looking to support their team and protect their head in hazardous conditions, NFL team hard hats are available. These rugged hard hats feature superior impact resistance while sporting the colors and logo of their favorite team.