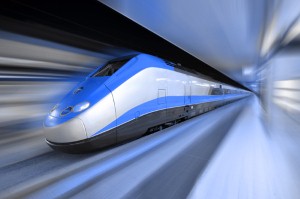 LaHood discussed with suppliers how they can maximize the economic impact of almost $800 million in American-made next generation trains that will be purchased or built this year.

"California’s investments in high-speed rail are creating jobs for American workers today and building a strong foundation for California’s economic future," said Secretary LaHood. "This is exactly what President Obama was talking about when he laid out his blueprint for an economy that’s built to last."

Building the rail line would mean a number of new jobs in the construction and manufacturing industries. By the second half of 2012, the California High-Speed Rail Authority hopes to begin construction on the first 130-mile stretch of rail in the state's Central Valley. The first phase will cost about $6 billion.

To protect workers from the hazards present in the manufacturing of rail supplies and in the construction of the high-speed rail, provide them with the appropriate safety products and follow standards set by the Occupational Safety and Health Administration (OSHA).