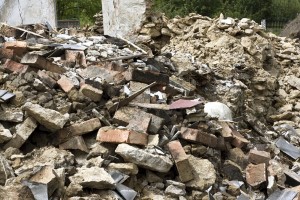 In late April, 2012, the U.S. Environmental Protection Agency (EPA) began a project to remove hazardous materials from a site in Danvers, Massachusetts. They expect the project to last for eight weeks, with additional investigation and potential cleanup operations possible.

The EPA's belief that the site's use across the 20th century as a leather tannery and finishing facility may have led to contamination of the property along the Crane River prompted an evaluation, which determined that arsenic in the surface soil still remains. The levels of arsenic are above the Imminent Hazard threshold, which represents a value that could put individuals at risk if they are exposed even for a relatively short amount of time.

EPA workers handling contaminated soils must be dressed in protective clothing as a precautionary measure.

The Occupational Safety and Health Administration (OSHA) has developed a number of standards for hazardous materials cleanup operations. In addition to standards on the use of safety products and protective clothing, OSHA also requires appropriate training for all operations, including the proper handling of hazardous materials. Ensure workers are wearing appropriate protection, such as respiratory protection, gloves, boot covers, and protective clothing to lower the risk of contamination on the job.