Earthquake preparedness in the workplace discussed by NSC 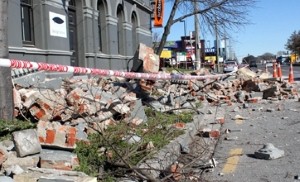 The National Safety Council (NSC) recently discussed how workplaces can prepare for earthquakes, including what tools to keep on hand and plans that should be made.

The NSC office building in Washington, D.C. was affected by last year's magnitude-5.8 earthquake that rocked the eastern seaboard, and although the office's safety manual addressed earthquake safety, no drill had ever taken place. After reviewing NSC's response, the office updated its safety procedures.

According to NSC, Darryl Madden, director of the Federal Emergency Management Agency's (FEMA's) "Ready" campaign, cautions against trying to leave a building during an earthquake. "You’re actually more at risk for getting hurt from falling debris if you evacuate the building. The safest thing to do is actually drop, cover, and hold on."

FEMA also advises reviewing workplaces for possible hazards, including structures that could fall and cover an exit and potential fire hazards. Developing plans for continued business activities in the event of structural issues after an earthquake.

Surviving an earthquake takes planning, preparation, practice, and training. In addition to training on what to do during an earthquake, providing information on where to find a first aid kit and other safety products in the event of an earthquake or other natural disaster will help during the aftermath.