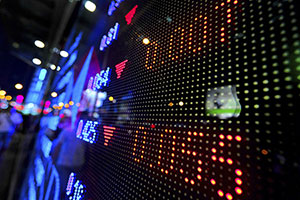 Not long ago, the United States was considered the tortoise of the world economy, at least in comparison to emerging powers like China and Brazil.

Lately, however, slow but steady seems to be winning the race. The American economy continues to chug along, while the onetime hares in Asia, South America and elsewhere are flagging.

The latest evidence of this shift came on Thursday, as the Commerce Department revised sharply upward its estimate of economic growth in the second quarter to a healthy annual pace of 3.7 percent, from an initial estimate of 2.3 percent. At the same time, the Labor Department, in reporting another drop in weekly unemployment claims, provided further evidence that the job market was on the mend.

Stocks on Wall Street jumped by nearly 2.5 percent on Thursday, following a broader 4 percent rebound on Wednesday. Oil prices also rallied by almost 10 percent to settle above $40 a barrel after sinking to postrecession lows earlier in the week.

“The United States relies more than any other developed economy on demand within our own borders,” said Carl R. Tannenbaum, chief economist at Northern Trust in Chicago. “While the focus in the past three weeks has been on international instability, this should position us to withstand the consequences of recent market volatility.”

With markets remaining on edge, investors are already turning their attention to coming data about the economy’s course, which will help determine whether the Federal Reserve will make its long-awaited move to raise interest rates in September or wait until later meetings.

Moreover, the impact of the recent plunge in stock prices on the broader economy will not be known for some time. Growth data for the current quarter will be released in late October. And the cutoff date for data for the Labor Department’s report on hiring and unemployment in August, due next Friday, was earlier this month, before the stock market correction took hold.

Still, far from the anxious trading desks in New York, many American executives in the business trenches report that growth has not wavered in recent months, and has even picked up in some cases.

“We have returned to prerecession levels, and we expect volume for the entire year to be above where it was back then,” said Jon Slangerup, chief executive of the Port of Long Beach in California, the country’s second-largest port. “There is tremendous consumer demand here, and we’re seeing a real surge in volumes.”

Much of what stevedores in Long Beach and other ports are hauling are consumer goods like electronics and apparel being imported into the United States, but the economic situation in the countries that produce those products is not nearly as cheerful.

Chinese output certainly is not shrinking, but the pace of expansion in what is now the world’s second-largest economy is clearly cooling down. And that is sending shivers through emerging markets in South America and Asia as well as in more developed economies like Australia, as China’s seemingly limitless appetite for iron ore, bauxite for aluminum and other commodities slows down.

Japan has faltered once again, and European economies have been in and out of recession in recent years.

While the German economy remains healthy and unemployment is relatively low there, Germany’s dependence on exports makes it more vulnerable in the face of weakening demand from China and its neighbors on the Continent.

As a result, companies from other countries are showing greater interest in acquisitions in the United States to increase their exposure to the faster-growing North American market.

Last month, for example, the Würth Group of Germany acquired Northern Safety & Industrial, based in Utica, N.Y., a maker of protective equipment like safety glasses, gloves and hard hats for industrial customers.

“We are their entree into the safety market in the U.S.,” said Neil Sexton, president of Northern Safety & Industrial. “I wouldn’t call the overall business climate here high-flying, but it is very solid.” Most of the company’s $200 million in sales last year came from North America, and nearly all of its 500 employees are based in the United States.

“Würth has a big target on the U.S. for growth,” Mr. Sexton added. “There are headwinds here from the energy sector, but there has been great strength in the chemical industry, and construction has also been a real bright spot.”

Much of the jump in overall economic activity during the second quarter, from an initial estimate of a 2.3 percent growth rate, came from strong spending by businesses looking to expand factories, buildings and other physical structures.

Other tailwinds included a better trade picture, as net exports improved, and increased government spending, especially at the state and local levels.

Companies also added to their stockpiles of goods, which could weigh on growth in the months ahead. Real private inventories increased at a $121.1 billion pace in the second quarter, adding a little more than 0.2 percentage points to overall economic activity.

In a separate report on Thursday, the Labor Department said initial claims for unemployment benefits fell by 6,000 last week, to 271,000 — a level that suggests the labor market remains on a solid footing.

When the Labor Department reports the latest figures for hiring and the unemployment next Friday, Wall Street is looking for a gain of about 200,000 jobs and expects the unemployment rate to remain flat at 5.3 percent. Normally, that might be enough to nudge the Fed into action, but the plunge in overseas markets and the correction on Wall Street has blurred that timeline. Many experts now expect policy makers to wait until December.

The uncertainty over the central bank’s course has prompted investors and economists to put each new data point under a microscope.

Yet for all the zigs and zags of economic data over the last couple of years, the underlying growth rate has not deviated much from about 2.5 to 3 percent annually, according to Nariman Behravesh, chief economist at IHS, a private research and forecasting firm.

“Historically, this is a modest growth rate,” he said, explaining that the American economy now faces what he termed “speed limits,” including the retirement of the baby boomers, slower population growth and weak productivity gains recently.

“Would we like to see faster growth? Of course,” said Mr. Behravesh. “But we’re growing twice as fast as Europe and three to four times as fast as Japan. For a mature economy, this is about as fast as we can grow, and it’s something we can feel good about.”


Go Back to Safety News
;