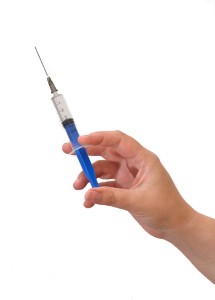 MedPro Safety survey finds that 68 percent of healthcare workers believe needlestick injuries are still a major threat in the workplace.

The survey took responses from 262 healthcare professionals at the APIC 2011 Annual Educational Conference in June 2011, which found that 68 percent stated they believe that syringe needlestick injuries have not been eliminated despite requirements established over a decade ago by the Food and Drug Administration (FDA), Centers for Disease Control and Prevention (CDC) and the Occupational Safety and Health Administration (OSHA).

The findings suggested a high degree of concern in the medical field about the present risk of needlestick injuries and the measures that are in place to control them.

According to the CDC, about 385,000 sharps injuries occur to hospital employees every year. Workers can reduce the risk of such injuries by following OSHA's requirements, which include safer needle devices and proper handling and disposal. Safety products, like puncture-resistant work gloves, are also beneficial for employees handling sharps disposal.