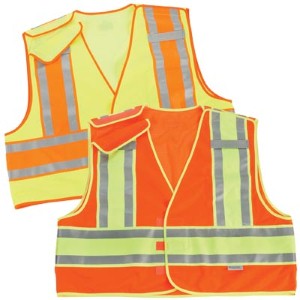 High-visibility protective vests are required for right-of-way workers, flaggers, and adult crossing guards by standards in the Manual on Uniform Traffic Control Devices (MUTCD), which the Federal Highway Administration (FHWA) uses as a basis for their regulations.

These garments must be compliant with ANSI/ISEA 107, the American National Standard for High-Visibility Public Safety Vests.

The revision to the MUTCD in 2009 requires public safety vests to be labeled as compliant with the 2006 standard, or any further changes to the version. ANSI approved the revision in 2011, leading the International Safety Equipment Association (ISEA) to seek an interpretation from the FHWA that safety equipment vests meeting the new standard would be acceptable.

ISEA claimed that the requirements of the two standards for daytime and nighttime visibility lacked any major difference.

FHWA agreed with ISEA, and has released an official interpretation that the ANSI/ISEA 207-2011 standard is equivalent to the 2006 version, and that garments labeled to meet the 2011 standard are also in compliance with MUTCD requirements.