DOT budget to be used for innovative transportation programs 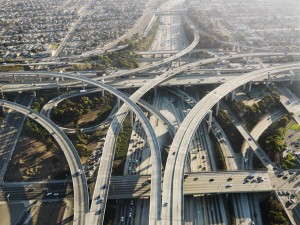 On Monday, February 13, 2012, U.S. Transportation Secretary Ray LaHood announced that the U.S. Department of Transportation had been given a budget of $74 billion, which will be used to create the framework for economic growth and competitiveness through infrastructure network investments, enhanced safety, and a modernized transportation system.

"President Obama’s budget for the Department of Transportation reflects our commitment to investing in an America that is built to last," said LaHood.  "A strong American economy depends on the roadways, runways, and railways that move people and goods from coast to coast and around the globe."

At the heart of the fiscal 2013 budget is a six-year $476 billion project that aims to improve highways and transit networks across the country, working to ensure the safety of travelers and providing them with more options for transportation.

With these funds, many new roadway construction and maintenance projects will begin, increasing the chances for injuries. According to the Bureau of Labor Statistics (BLS), a preliminary total shows 103 fatalities in work zones occurred in 2010. That year, transportation incidents accounted for 72 percent of roadway work zone fatal occupational injuries.