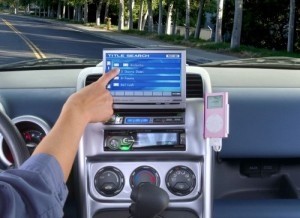 On Thursday, February 16, 2012, U.S. Department of Transportation (DOT) Secretary Ray LaHood announced the first-ever federally proposed guidelines to urge car makers to design vehicles with the risk of distraction from electronic devices in mind. The move could prevent the installation of "excessively distracting devices" and enhance safety for drivers, pedestrians, and roadway workers.

The new guidelines would be voluntary, and would apply to communications, entertainment, information gathering, and navigation devices that are not required to safely operate a vehicle.

Written by the National Highway Traffic Safety Administration (NHTSA) division of the DOT, the guidelines would create specific recommended criteria for electronic devices that are installed in vehicles and require drivers to visually or manually operate them.

"Distracted driving is a dangerous and deadly habit on America’s roadways – that’s why I’ve made it a priority to encourage people to stay focused behind the wheel," said Secretary LaHood. "These guidelines are a major step forward in identifying real solutions to tackle the issue of distracted driving for drivers of all ages."

After performing extensive studies, NSHTA says it considers some tasks performed by drivers to be unsafe and should be locked out when the car is in motion. The list of "per se" lockouts includes displaying photographic moving visual images that are not related to driving, automatically scrolling text, manually entering information, and reading more than 30 characters of visually presented text.

The guidance was proposed to keep roadways safe for all, including highway workers. According to the Centers for Disease Control and Prevention (CDC), drivers encounter many distractions while in highway work zones, such as signs, barrels, and abrupt lane changes. Data from the Bureau of Labor Statistics (BLS) shows that crashes in work zones led to the death of 103 workers in 2010. Highway workers can reduce the risk of injury or death by wearing appropriate safety equipment, such as high-visibility safety vests.