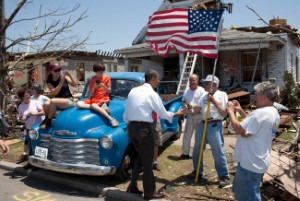 The tornado response and recovery efforts currently taking place in Texas are echoing the devastating storms that leveled the town of Joplin, Missouri, in May, 2011 - where the efforts to rebuild are still underway.

In February, Missouri Governor Jay Nixon announced the 2012 Governor's Joplin Habitat Challenge in order to attract more volunteers and donations to help the recovery effort. The challenge is to construct 35 new homes in Joplin with the Joplin Area Habitat for Humanity before the end of 2012. Though only a fraction of the 7,700 homes that were damaged or destroyed, the plan marks a commitment to rebuilding the city.

The program is supported by a $3.6 million federal Community Development Block Grant, as well as all the state's professional sports teams, the University of Missouri Tigers, and the Kansas Speedway, which has partnered with NASCAR Unites. The project will divide the 35 planned homes into 7 neighborhoods, with each neighborhood sponsored by one of the seven Missouri athletic organizations. Members and other staff from each of the teams will volunteer their time on several occasions throughout the project to help achieve the goal.

At the 2012 Joplin High School graduation, President Obama and Governor Nixon are slated to speak on the progress of the recovery.

Provide workers and volunteers with protection from recovery operation hazards, such as falling debris and sharp objects, by supplying appropriate safety products, including work gloves, safety glasses, and hard hats.