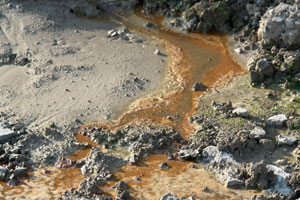 In the agreement, the companies will help remove the contaminated material, install a protective cover over the excavated area, and take the materials to a lab for testing of any possible sediment treatment technologies. The dredged mud will be disposed of with EPA oversight.

"This agreement triggers actions that will reduce exposure of people and wildlife to the highly toxic contaminants in the Passaic River sediment and keep it from spreading to other parts of the river," said EPA Regional Administrator Judith A. Enck. "Under the Superfund agreement, the companies responsible for the contamination will conduct and pay for the work with EPA oversight, rather than passing the costs on to taxpayers."

The project is expected to cost about $20 million, in addition to the costs of the EPA overseeing the cleanup work.

According to the Occupational Safety and Health Administration (OSHA), all hazardous waste operations must have a site control program in addition to a safety and health program to keep employees safe from contamination. These programs help to protect workers by identifying hazards and providing information on required safety products, including respiratory protection and protective clothing.