Hawaii to get first-ever rail system thanks to DOT grant 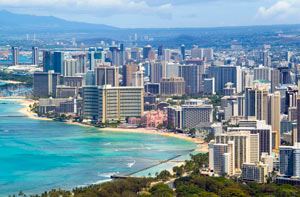 On December 19, 2012, the U.S. Department of Transportation announced that it had signed an agreement providing the city and county of Honolulu, Hawaii with $1.55 billion to help construct the first rail transit system in the state.

U.S. Transportation Secretary Ray LaHood participated in a signing ceremony, where he said that the project "will create a modern transportation system that is built to last for future generations." The new rail system will give residents more transportation options, improve tourism, and create thousands of jobs in the construction sector.

"Hawaii’s first rail transit system will be a game-changer for the region because it will serve nearly 80 percent of Oahu’s total population, including thousands of workers who commute into Honolulu every day from West Oahu,” said Federal Transit Administrator Rogoff. “This historic project will cut commute times west of the city by more than 30 minutes each way, drastically improving the quality of life for residents who want to spend less time in their cars, more time with their families, and enjoy cleaner air."

As with any construction job in the U.S., the new project must adhere to standards written by the Occupational Safety and Health Administration (OSHA). Equip workers with appropriate safety products, including hard hats, work gloves, and safety glasses.