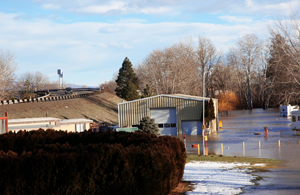 Major floods can cause serious damage, injuries, and death, so when flooding is possible, the National Weather Service issues watches, warnings, and advisories to alert the public. To respond appropriately, workplaces need to understand what these alerts mean and what to do when they are issued.

By taking the proper actions, employers can help reduce the danger and damage of floods. Below is an explanation of each warning and how work teams can appropriately respond:

• Flood Watch: A flood watch indicates that flooding is possible. When a flood watch is announced, employers might consider alerting workers since the situation could worsen. Workplaces should stay tuned to local radio, television, or news websites for further advisories. Work teams may want to reconsider any travel they have planned

• Flood Warning: A flood warning means that a flood is expected and will probably happen. When a flood warning is issued, it is time to take action and employers need to put their flood safety plan into effect. This might include moving workers, vehicles, food, and equipment to a safer place, turning off the facility’s gas and electricity, and positioning sandbags or flood boards
• River Flood Warning: These warnings are issued when a river at a gauge site is expected to or has exceeded flood stage. Employers with facilities located near or next to rivers should take action immediately in the event of such a warning
• Flash Flood Watch: When human lives and property are in danger due to sudden and serious flooding, a Flash Flood Watch will be issued. Workers should be prepared to move to higher ground if necessary and stay tuned to NOAA weather radio or local news sources for more information
• Flash Flood Warning: This type of warning is issued in response to a few hours of seriously heavy local rainfall, a dam or levee break, or when water is rapidly released from an ice jam and causes nearby flooding. When Flash Flood Warnings are issued, workplaces can expect flooding to occur very soon if it hasn’t already. Employees should evacuate immediately if advised to do so and head on foot to higher ground
• Urban and Small Streams Flood Warning/Advisory: When this type of warning is issued, it means that flooding is occurring in small streams, roads, and low-lying areas such as city storm drains or railroad underpasses. To ensure safety, work teams should avoid such locations. Employers can also remind workers not to drive through flooded roads. The depth of water cannot always be known since the road bed may be washed out beneath the water. Driving through flooded roads can cause motorists to become stranded or trapped. It is important to remember that many vehicles will float in only one foot of water, and can be carried away by two feet of rushing water